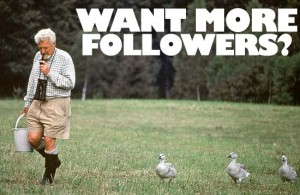 The idea of "Promoted Twitter" is roughly an extension of the idea of "Promoted Tweets" which Twitter has already implemented. However, this is much more complex and still has many unanswered questions. One questions that everyone would be asking is - "How much is the value of a Twitter follower?". And there are also the questions of how it will be charged as we have said before. Another question is "Will people actually pay to get more followers?" I do not know about you but to me paying to get more followers seem lame.

At this stage, Twitter will not reveal anything regarding this. This is what Twitter Spokesperson, Sean Garrett, wrote:

We will eventually have full suites of both promoted and commercial products. All the components of these two buckets of product have yet to be determined. Some are currently being tested publicly now. Some will be tested soon. Some are just ideas that we are broaching externally for feedback

If Twitter actually brings out this feature, will you ever consider buying followers?