Use Google Timeline to track important events in Google’s history

Google recently celebrated it's 11th birthday. Google has really come a long way to become one of the biggest internet companies of today's age. Now, using this timeline you have a quick look at the important events that took place at Google, some of which revolutionised the way they were done before. The Google Timeline lists some of the key milestones in Google's development. These milestones have been classified into various categories such as Milestones, Culture, Products, Stats, Image, Video and Definition. 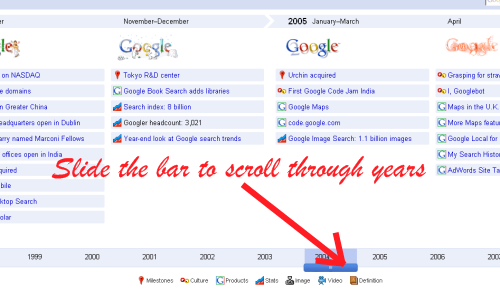 The Google Timeline (A part of it has been shown here)

The version of Google Timeline described above is the interactive one, you might like to see the non interactive, simple timeline.

Use Google Timeline to track important events in Google’s history was originally published on Digitizor.com on September 28, 2009 - 2:59 am (Indian Standard Time)