Google’s tablet operating system is a little different from the versions of Android which have seen before. Android Honeycomb tablets such as the T-Mobile 7" Google tablet are designed to take full advantage of the extra screen space –so it’s up to the user to decide how to utilize it. Initially there might be a disturbance due to the complexities of the Honeycomb, but after getting hands-on, the personalization part becomes duck soup.

Here’s a quick guide to help you get started.

Let’s begin with the home screen. The Android Honeycomb home screen keeps all of the OS’s main controls visible on the tablet’s display always on the right side.

Navigating Around in Honeycomb

Back, Home, and Multitasking are main navigation options, present everywhere irrespective of your location in the Honeycomb.

Occasionally, a fourth small grid-like icon may appear in the bottom-left portion of the screen when a smartphone app that isn’t optimized for the Honeycomb interface is used. When you work with optimized apps for Honeycomb, the grid icon is supplanted by what Google likes to call the ‘action bar’- letting you take various related actions for the apps.

The plus sign in the upper right corner of home screen when tapped, leads to Honeycomb’s customization control. center. In the control center, there are thumbnails of all five home-screen panels and a list of items that can be placed anywhere you like.

Below are the pics for proper look (Click to Enlarge). 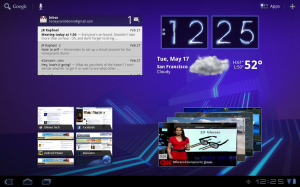 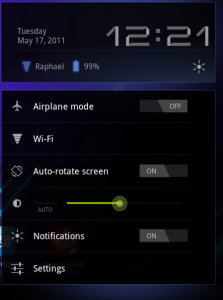 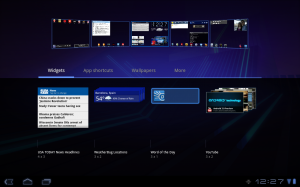 Honeycomb 101: Know Your Android Tablet was originally published on Digitizor.com on May 21, 2011 - 8:00 pm (Indian Standard Time)