How To Install Firefox 5 Beta In Ubuntu Using PPA

With the new accelerated development (or rather versioning) of Firefox, Firefox 5 beta had been released a few days back. In this post, we will tell you how to install from Mozilla's PPA.

As of now, there are not much visible changes between Firefox 4 and Firefox 5. There are a few improvements under the hood though. In the release note, it is said Firefox 5 has better Linux integration - I am yet to see what they mean. 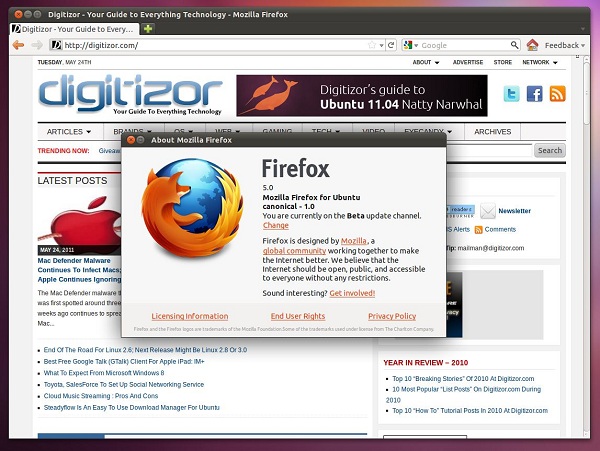 The PPA contains Firefox 5 for Ubuntu 11.04 and Ubuntu 10.04. Anyway, if you want to install Firefox 5 beta in your system, here is what you have to do.

Note: Firefox 5 beta may break or not function as intended. Install it at your own risk.

Open the Terminal and add the PPA.

After the PPA has been added, update the software list and install Firefox.

That is it. You should now have Firefox 5 beta installed.

How To Install Firefox 5 Beta In Ubuntu Using PPA was originally published on Digitizor.com on May 24, 2011 - 6:18 pm (Indian Standard Time)