Microsoft Wants Samsung To Pay $15 For Every Android Phone 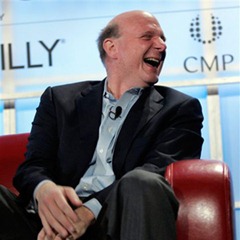 Microsoft has already got a number of Android Phone manufacturers to give them pay a licensing fee for every Android device they sell by threatening to sue them. In fact, their income from the licensing deal with HTC is said to be more than five times their earning from Windows Phone 7.

With such sales figures, it is not surprising that Microsoft wants a share of the money that Samsung has earned by using software developed by Google. At the time Microsoft entered into the licensing deal with HTC, HTC was the leading Android manufacturer.

Right now Samsung has not made official statement about this. I hope they do not give in to Microsoft’s demand and fight it out in court – although that seems unlikely given their existing relationship with Microsoft for Windows Phone 7. As for Microsoft, it is sad to see them going down Oracle’s route.

Microsoft Wants Samsung To Pay $15 For Every Android Phone was originally published on Digitizor.com on July 6, 2011 - 8:05 pm (Indian Standard Time)