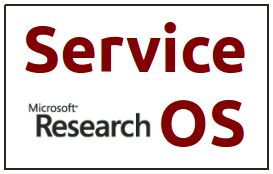 With Google ChromeOS nearing it's release date (via the Chromebook on 15th June) it looks like Microsoft has been working on something similar too. ChromeOS basically puts all user data in the cloud and aims to synchronize all that data using Google Accounts so that whenever users log in to their computers from different locations, they still get the same experience, everywhere! Read more about how Google unveiled Chrome OS.

Microsoft has been trying to achieve a similar effect with Windows 8 - first, making it available for various kinds of devices such as desktops, mobile phones, laptops, tablets, etc. and second, by making available a number of features on Windows Phone Mango which are already available in Windows 8. Now, it looks like Microsoft has even started working on the initial features for a web based operating system called the ServiceOS.

Microsoft describes ServiceOS as an advanced web browser that can work as a replacement for a regular operating system, possessing capabilities for managing various system resources such as CPU, Storage, Memory and Network. It can also manage peripheral devices such as mics, cameras or built-in GPS modules.

Here are some features of the ServiceOS:

You can find more details about the ServiceOS here and here. It will be interesting to see is when Microsoft comes out with the ServiceOS (if in the future), how will users manage syncronisation of their data as they would have already used Google's ChromeOS to achieve the "Sync".

Microsoft Building ServiceOS – A Google ChromeOS Rival? was originally published on Digitizor.com on May 31, 2011 - 6:00 am (Indian Standard Time)