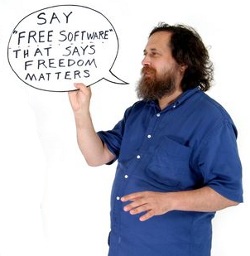 We all know that Richard Stallman has some very strong, serious and unconventional views on software freedom. Well, someone decided to ask him his view on dual booting Linux with Windows. His reply? "Defenestrate it."

Defen what? Well, I must also admit that I have never heard this word before. According to Wikipedia, "Defenestration is the act of throwing someone or something out of a window." Stallman was, however, kind enough to include the meaning of the word in his reply.

Well, here is the question pecet wrote to him:

So my friend, let's call him Phlegmatic has dualboot with Windows, what is your opinion on that?

He claims that he's truely GNU/Linux user, but actually he using that Windows for gaming,

could you write something about dualbooting and why it is enemy of his freedom?

Thank you in advance

Sended from my iPad (not dualbooted!).

It is unfortunate that he still has nonfree software in his computer.

I love the reply but I wonder why Stallman did not make any comment about pecet using "iGroan/iBad" to send him the email.

So, what is your opinion on dual booting Linux with Windows? Do you avoid it in favor of freedom or do it anyway for convenience?

As for me, I have been purely a Linux user for a very long time. However, with the poor support of my hardware in Linux, I decided to install Windows 7 alongside Linux. So, yes, I dual boot now and choosed convenience over freedom.

Richard Stallman’s Opinion On Dual Booting – “Defenestrate It” was originally published on Digitizor.com on May 31, 2011 - 3:29 am (Indian Standard Time)