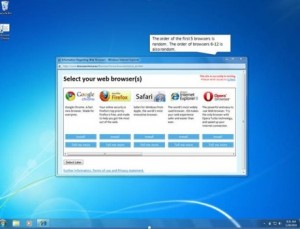 Starting next week, Microsoft's automated Windows Update service will present users with a "Web browser choice screen" as required by a settlement agreed with the European Commission's competition department last year. Next week's rollout will be available as part of a testing process to some users in the UK, Belgium and France. It will be rolled out in 30 European countries next month, but not worldwide.

The "Web browser choice screen" will show a range of browsers, with the top five presented in random order. Users will be able to click a button to install whichever browser they like, or ask for more information from the browser's provider. The selection may change if there are changes in market share.

Internal testing of the choice screen is underway now. We'll begin a limited roll-out externally next week, and expect that a full scale roll-out will begin around March 1, a couple of weeks ahead of schedule.

The EU case was kicked off by complaints from Opera, which is based in Norway. According to usage-based statistics from Statcounter, Microsoft's IE has a 45.4% market share in Europe, followed by Mozilla Firefox (39.3%), Google Chrome (6.4%), Opera (4.3%), and Apple's Safari (3.7%). While it is not clear if the new "ballot screen" will increaes Opera's adoption, it is sure to decrease Internet Explorer's huge market share.

Microsoft to offer Windows users a browser choice screen was originally published on Digitizor.com on February 22, 2010 - 2:24 am (Indian Standard Time)