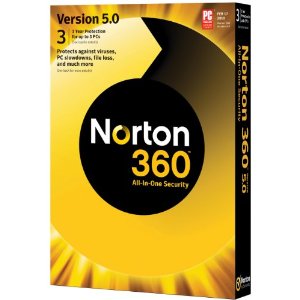 Symantec's flagship product - the Norton 360 suite recently entered into it's version 5.0 and Symantec describes it as the industry's fastest and the most effective all-in-one security suite for desktops and laptops. We recently got a chance to lay our hands on a copy of the Norton 360 suite Version 5.0 and lets find out if it really is one the best computer security tools out there.

At the first look, Norton 360 v 5.0 has a clean, sleek and new user interface which really looks nice for an antivirus program and is definitely an improvement over the UI in Norton 360 Version 4. It has three different tools that helps you keep your computer safe, these are the SONAR 3, Insight and the Norton Bootable Recovery tool. All these have been present in the version 4 of the software as well.

Sonar 3 protection detects and eliminates threats based on behavior of various programs so you need not worry even if there is a very new threat on the Internet which might potentially harm your computer. Sonar 3 will take care of it all! Next is Insight which blocks new threats based on reputation and statistics. And the third is Norton Bootable Recovery tool which cleans your computer even if you are not able to boot up your system.

Another new feature in the Norton 360 Suite v5 is the Norton Control Center using which you can directly check out Norton Safe Web, Norton Online Family and the new Norton Cybercrime Index without having to open up a browser. It also has a backup and tuneup module using which you can save your important data online on Symantec's digital vaults.

Norton 360 version 5.0 retails for $79.99 which includes 3 licenses and 2GB of online storage. However, you can upgrade to 25GB storage for just an additional $20. From our use of the software, we were satisfied and feel Norton 360 totally lives up to Symantec's claim of being the best security suite out there.