I am a big fan of rage comics and F7U12 is one of my must visit sub-reddits everyday. There are a couple of very good Android app for Reddit - Bacon Reader and Reddit Is Fun. However, if you simply want a rage comic reader, these apps have too much features. In that case Rage Reader could be a very good option.

Unlike the other Reddit apps, Rage Reader only displays the rage comics posted in F7U12. It does not support Reddit accounts, upvotes, downvotes, comments etc. In short this application does nothing more than display a list of the rage comics posted in F7U12 and loads the desired comics for the user. It does a very good job at what it does and that is what makes it a very good app if all you want is to read some rage comics. In fact, the lack of features keeps in simple and fast.

The fact that Rage Reader takes the comics from F7U12 ensures that you get fresh rage comics everyday. The application also allows you to save the comics locally on your Android device and if you want, share it with tour friends.

This app is available on the Android market for free. It does not have ads either. Rage Reader is definitely a must have app for anyone who enjoys rage comics.

Here are a couple of screenshots of the app and the link to the Android Market is at the end. 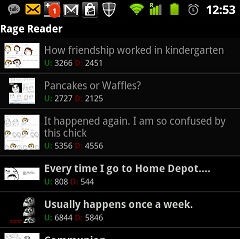 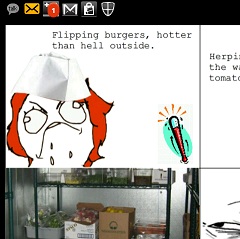