Who Is Roy Castillo And Why Is He All Over Facebook?

Earlier today, we wrote about Facebook CEO Mark Zuckerberg's page being hacked. As if that is not enough for the day, something very weird is happening again in Facebook. It seems like a lot of people are seeing a status update from a complete stranger named Roy Castillo.

UPDATE: Well, this is suspected to an XSS Hack. Fotozik has an explanation which points towards what exactly may have happened.

The status update says "Off to Danao City" and it is being posted in the news feed of many Facebook users all over the world.

People are taking to Twitter to talk about this issue and a quick search in Twitter reveals that the issue is quite widespread.

So, who is Roy Castillo and why is he in everyone's Facebook news feed? We do not know for certain yet, but my guess is that he is just a normal user and his status update appearing on random stranger's news feed is probably because of a bug in Facebook. There is no indication to suggest that it might be related to the earlier hack of Zuckerberg's Facebook page.

Anyway, this bug (?) is making Roy Castillo one of the most famous people right now. Enjoy your fame Mr Castillo. 🙂

I did not see the said status update in my wall. Did it appear in your Facebook wall? 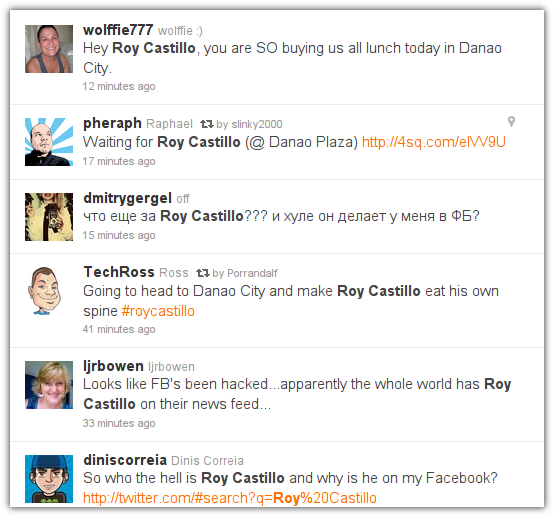 Who Is Roy Castillo And Why Is He All Over Facebook? was originally published on Digitizor.com on January 26, 2011 - 6:10 pm (Indian Standard Time)