Songbird for Android 1.0 Available In The Android Market

After about two months of beta testing, the Team Android at Songbird has released the first stable version of Songbird for Android today. If you were using the beta releases, you would not be blown away by this release. Nevertheless, it is one of the best music player available for Android.

Some features that might set Songbird for Android apart from the rest of the media player might be its Facebook integration. You can "Like" songs from within the app and it will show up in your Facebook wall. Another feature is the Flickr integration - you can browse through photos of the artist while you are listening to the songs.

As a music player, Songbird has everything I expect from a music player. It is one of the prettiest music apps for Android. One thing I like in the UI is the presence of navigation elements like Playlists, Artists, Albums etc. at the top while browsing through songs, albums etc.

A few features that have been added since the beta includes ability to create playlists and Last.fm scrobbling. It does not have a lock screen widget yet. But it is planned for inclusion in a future release.

Here are some screenshots of Songbird for Android: 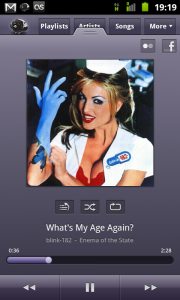 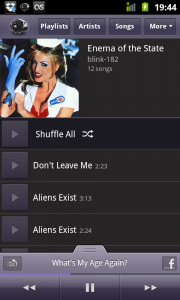 Songbird is now my favorite music player for Android. It looks even better than MIUI Music and supports Last.fm scrobbling. It does not have the awesome lyrics feature of MIUI Music, but I can live without that. Compared to Winamp, Songbird still does not have a lock screen widget. But that is not something that I usually use. Beside, despite the recent changes, Winamp still looks ugly compared to Songbird.

You can install Songbird for Android from the Android Market. Click on the link below.

Songbird for Android on AppBrain
Advertisement

Songbird for Android 1.0 Available In The Android Market was originally published on Digitizor.com on March 16, 2011 - 8:33 pm (Indian Standard Time)