We just told you about Google Zeitgeist 2010. Now it is time for Twitter to publish its "Year In Review". The "Year In Review" consist of five categories of which only one has been revealed at the moment - the other four are "coming soon".

The only live category - "Who's New" - lists the some famous people who joined Twitter in 2010. They are arranged on branches of a tree according to the month they took the plunge. Hovering over any one of them brings up their first tweet. There are 40 people listed here - some of them are Diego Forlan, the Uruguayan soccer player who won the Golden Ball in 2010 FIFA World Cup, Damai Lama, Bill Gates, Russel Crowe, Cher, Hilary Duff etc.

Compared to Google Zeitgeist, Twitter's Year In Review is not too exciting - in fact it is pretty boring. However, there are still four more categories they are yet to reveal. Any guess on what they could be? 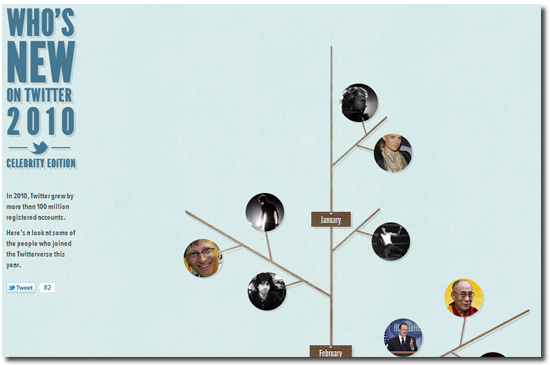