Well, Twitter did not literally kill Johnny Depp. But if you were to go with the Twitter trending topic, you would be led to believe that he is really dead. Sources say that Johnny Depp is well and certainly not dead and that the whole twitter thing is a hoax.

This thing started some 4-5 hours ago when "RIP Johnny Depp" made it to the twitter trending topic. We are not able to determine the first tweet which stared all this but we are quite sure it was the fake "CNN" website shown below which was the source of the hoax. 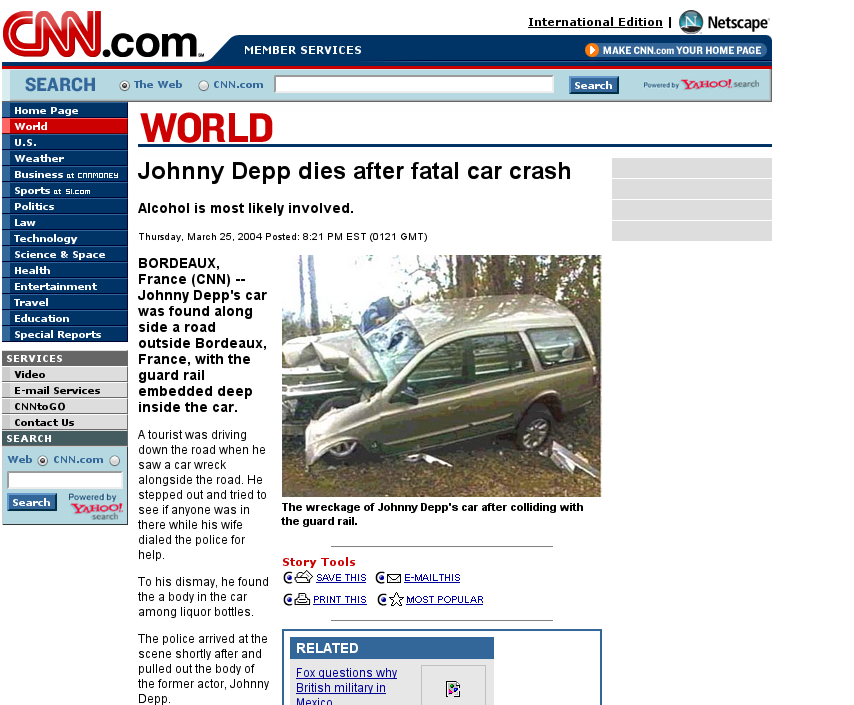 About the fake CNN site

Here is what Lycos, Inc. said in an email to Digitizor:

Angelfire.com is a Lycos, Inc. website which is a paid or free (ad-supported) web hosting provider which includes hundreds of millions of user-created webpages. The page that you are describing would violate our terms of service and we would like to have it removed.

Lycos Inc., followed this up with an email to us saying that they have removed the page in question.

Can Social Media be a source of news?

This incident brings into question the credibility of Twitter as a source of real time news. For quite sometime now, it was claimed that with social media being the new news source, traditional news media like newspapers are struggling to compete. This incident will certainly bring into focus the fact that with social media it is next to impossible to acertain any information before it spreads like a wildfire. So we can never trust what we see in something like twitter, the way we can trust a newspaper.

Another thing that came to my mind after seeing this hoax is in regards to its timing. If you have been following the technology news recently, you will know that on Friday an experiment was started to see if it is possible to write news based on only Facebook and Twitter. People had suggested the possibility of such hoaxes just to mess with this. Was this a hoax to mess with this experiment? Maybe or maybe not.

The bottomline is that Johnny Depp is not dead and the whole thing twitter is just a hoax. It also underlines the fact that twitter users need to sometime question a tweet from someone before blindly spreading it by retweeting it or tweeting about it.