You Are Here: Home » Linux » Reviews

Thoughts On Ubuntu 11.04 “Natty Narwhal” After Using It For A Day

Like in the recent versions of Ubuntu, the installation of Ubuntu 11.04 was a breeze - anyone who can read and click will be able to do it. A new thing that I noticed in the Ubuntu 11.04 installer that I did not see in earlier versions of Ubuntu was that it also gave me the option to upgrade my previous Ubuntu installation. In Ubuntu 10.10, users had to download a different CD image if they want to upgrade their previous installation. Full credits to the developers for unifying them in one CD image. However, I did a clean install.

The installation went without a hitch and when I rebooted my laptop, I was greeted with the Unity interface. Compared to the GNOME 2 desktop which I have seen remain the same for a very long time, Unity was a like a breeze of fresh air. I was quite excited with the changes. I love the dash in Unity. With the Unity dash, I can get to whatever application I am looking for much faster by just typing its name - unlike in the classic GNOME desktop where I had to go through menus and sub-menus. 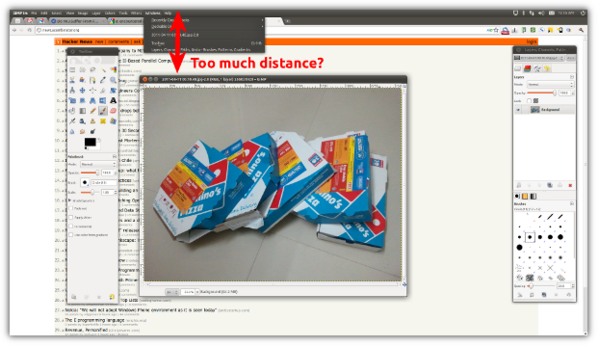 That being said, not everything is rosy with Unity. There are also quite a few things that I do not like about Unity. One thing that I really do not like about Unity is the AppMenu or the GlobalMenu. In Unity the menu bar of the applications comes in the panel not in the application window - like in Mac OS X. This might be a good idea on a netbook, even on my laptop I can use it. However, on my external monitor, it is a nightmare to use. While using certain applications such as GIMP, the distance the cursor has to travel to get to the menu is infuriating. I hope the developers make the AppMenu optional in the next release or someone come up with an easy way to disable it.

Another thing that I find annoying in Ubuntu 11.04 is that clicking on an icon on the Unity launcher does not minimize it. Being a long time user of Windows and GNOME, I am used to that behavior. Maybe I will get used to it after a while, but right now it annoys the hell out of me when I click on the icon on the launcher and it does not minimize it. I would also love to have some configuration options available for Unity - like to disable the launcher auto-hide, make the icons smaller etc. Sadly there seems to be no way to do it easily. (Update: Turns out it can actually be done quite easily. We have a post coming up on how to do it.)

So, after using Unity for a while, I was irked by some of its features and the lack of some other. But overall, I felt that Canonical is taking a right design step with Unity. Not everything is perfect with Unity in its current implementation, but I feel that it can only get better. One thing that I noticed though after using my laptop for a while (around 2-3 hours) is that my laptop slows somewhat. I am not sure if it is because of Unity or something else but with Unity 2D (coming to that later) I feel that the slow down did not occur.

After playing around with Unity, the thing I did next was install a bunch of updates. Jockey notified that the proprietary driver for my ATI graphics card was available and I installed that as well. The updates went fine and I also installed some applications that like. (You might want to read our post on what to do after installing Ubuntu 11.04.)

The default applications that come with Ubuntu 11.04 are hardly unchanged from that of Ubuntu 10.10 - except for LibreOffice and Banshee. I have used LibreOffice before - it is pretty much identical to OpenOffice. So, I did not expect to have any problem with LibreOffice and I did not. I did notice one interesting thing with LibreOffice though. Unlike the other applications, LibreOffice does not use the AppMenu. I am not sure why. This could not have been an oversight (the testers during the alpha and beta stage would have caught it) and if this was a design decision, it make no sense to have such inconsistency.

The story with Banshee is however different. I have used Banshee before but I gave up on it a long time back because it was slow and sometime the playback was choppy. So, I did not have much expectation from Banshee - I even installed Rhythmbox and it was already set on my mind that my default music player will be Rhythmbox. I tested Banshee nevertheless and I was pleasantly surprised. Banshee in Ubuntu 11.04 was fast and I quite enjoyed using it. The choppiness in playback that I remember was gone and my overall Banshee experience was good - much better than what I was preparing myself for. It looks like being picked as the default music player has done Banshee a world of good.

I know that so much of this post has been about Unity. I guess that it is inevitable since unity is the biggest change in Ubuntu 11.04. Again I am bring up Unity. This time it is Unity 2D.

You see when I restarted my laptop later on - after doing all the updates and installing the proprietary ATI graphics card - I was greeted with a dialog which says that my laptop is not capable of running Unity. So, Ubuntu logged me in to the GNOME Classic Desktop. Although I loved the GNOME Classic Desktop, not being able to use Unity was a bit of a downer. Later on I found out that the proprietary ATI driver does not support 3D acceleration which is needed for Unity to run. 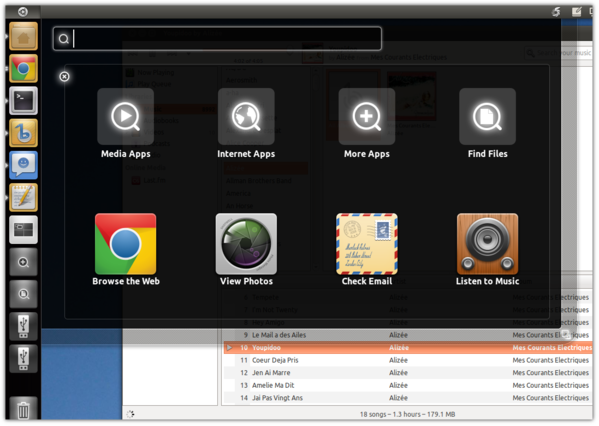 Unity 2D was able to run though. Unity 2D is a version of Unity which is being developed on Qt rather that Compiz. Because it does not need Compiz to run, Unity 2D can run on older hardware and on systems which does not have 3D acceleration. Apparently, it will be the default fallback option in Ubuntu 11.10.

Anyway I installed Unity 2D and all I can say about it is that it is fantastic. Yes, the problems I had with the design of Unity that I mentioned above still holds for Unity 2D as well. However, compared to the Compiz based Unity, Unity 2D seems a lot faster and much more responsive. Unity 2D did not come with some of the fancy stuffs that comes with the normal Unity like transparency, shadows effects etc. But those effects can be turned on quite easily in Unity 2D as well using a third-party package. (Note: Refer to this post to install Unity 2D.)

All I can say about Unity 2D is that even if my laptop can run Unity 3D, I would pick Unity 2D over Unity 3D. In fact, I removed the proprietary ATI driver and reverted to the open source driver. I was able to run Unity 3D but I still preferred to use Unity 2D.

There is a little change in the scroll bar in Ubuntu 11.04 whic I almost forgot to mention in this post. I quite like it so I am mentioning it although it is quite a subtle change. 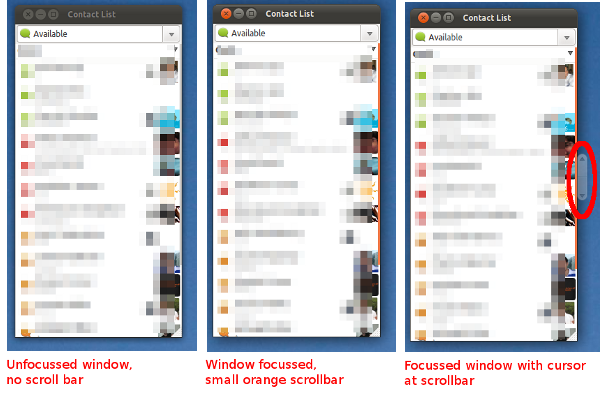 This has been a very long post - probably the longest ever on Digitizor. So, inspired by what I saw on Reddit earlier today, what do you think about adding "apple" to your comment if you read the post this far.

Ubuntu 11.04 Natty Narwhal is a big change from the earlier releases because of Unity. I know there are a lot of people who do not like this release because of Unity - I was one of them during the development stage. But after using it, I do not think that it is as bad as what people are making it out to be. Yes Unity is different and I was reluctant to learn it when I first saw it. But once I got the hang of it a bit, it was quite good. Yes there are annoyances as I have pointed out. But remember that this is the first release for Unity. I think the overall direction that Unity is taking is a good one and by the next release or the one after that, we should see Unity really maturing.

Should you upgrade to Ubuntu 11.04? That is a different question altogether. If stability is your main concern, I think you should not upgrade and stick with an LTS release. Otherwise, if you are like me and like to try out new software, I think you should. Even if you do not like Unity, there is still the Classic GNOME Desktop available.