Use Google Wave without even receiving an invite from Google

Google Wave has already been termed as the next best thing to happen to social computing and collaboration. Since Google Wave in it's early stages, it can only be used by those lucky ones who have an invite from Google to use the service on a preview basis. In case you have not received an invite yet but really want to check out the service, PyGoWave is what you should be looking at.

PyGoWave is the ditto implementation of Google Wave, the code for which is directly derived from Google's published Wave API and protocol specification. PyGoWave uses Django - a well-known python web framework and is in a very early stage. This will eventually be a full-featured server implementation for easy use, extention and integration with your web servers and applications. 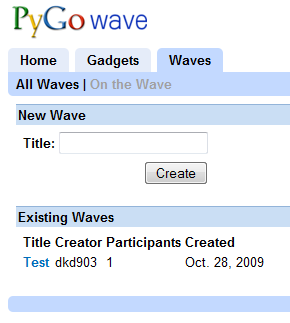 PyGoWave has been developed by a group of Hot shot programmers and works and looks just like the real Google Wave as it uses the Google Wave API. PyGoWave is open to all and does not require any invitation for getting started unlike Google Wave. All you need to do is visit http://www.pygowave.net and register for a free account. In no time you will receive an e-mail asking you to confirm the registration and after this you can starting using Wave.

Use Google Wave without even receiving an invite from Google was originally published on Digitizor.com on October 29, 2009 - 12:00 am (Indian Standard Time)