You Are Here: Home » India » Video

MTV Roadies is a youth-based reality television show on MTV channel in India. Roadies has travel, adventure, drama, touch of

voyeurism. The selected Roadies (participants who make it to the next level after personal interviews and auditions) are provided with bikes which they are supposed to use for traveling across on the show.

MTV Roadies is currently in it's eighth season and is titled as "Shortcut To Hell" because the second half of this 8th season took place in China (which is otherwise also known as Shortcut To Hell) and the tasks which the roadies were made to perform in China were very difficult. Auditions were held in Ahmedabad, Kolkata, Bengaluru, Chandigarh and Mumbai.

You can watch all Roadies 8 episodes online on the Roadies website. There is a video section that has archives of all episodes that have been tele-casted  in this season. There is also a live stream that goes on air every weekends at 7PM (indian time).

In order to watch the Roadies 8 episodes on your mobile phones you can visit the Mobile site of Roadies 8 at: 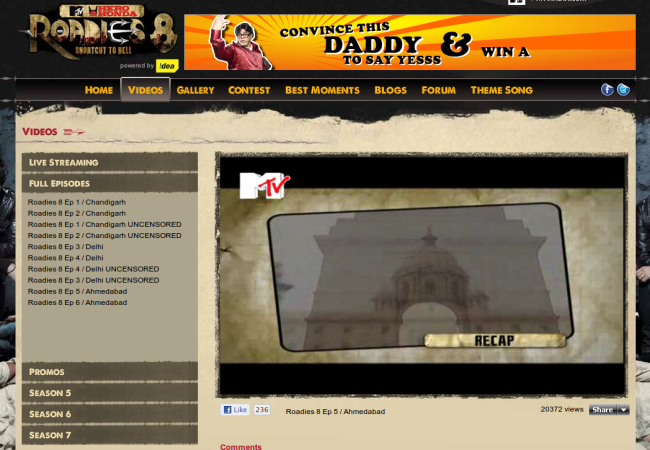