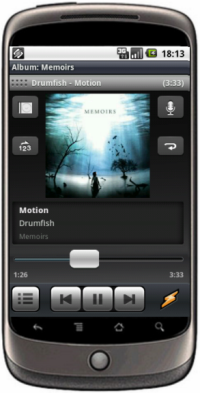 There was a time when Winamp used to be the default Music player for many but gone are those days now. Well, as far as I am concerned, I was also a very avid user of Winamp Music player until Linux became my de facto OS of daily use.

Old memories apart, there is definitely some good news for the Android users, as Winamp has launched an android version of their awesome Music Player.

According to a post from the Winamp blog, this android version of Winamp music player is in beta and is available for Android 2.1 OS and above.

One good thing that we like about this release is it's ability to seamlessly sync music with your Winamp desktop library. So if you listen to a good song on your Desktop, no need to manually transfer it to your phone from now on!

For those who can't wait any further, just point your Android phones to the QR code and get Winamp on your phones right away!

Listed below are some of the noteworthy features of Winamp music player for the Android Platform:

You can Download and install the app on your Android phone either by pointing your phone to the QR code  above or from this link:  Download Winamp for Android.