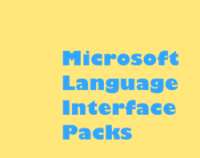 Microsoft is planning to introduce 59 new Language Interface Packs (LIPs) for both Windows 7 and Office 2010. The LIPs will be also available for Visual Studio 2010.In addition to this, Microsoft will also be provide customers with new Caption Language Interface Packs (CLIP) which will make it possible for the software’s interface to show terms in a specified language, but also keep the base language in place, whether it is a LIP or a fully localized version.