Google Analytics Team: Windows Market Share Down By 5% In One Year

In the tech circle, Windows dead has been predicted many times but it has never happened, mainly because of its enormous size. However, according to data released by the Google Analytics Team, the market share of Windows is going down.

The Google Analytics Team has compiled data and analyzed data from all the websites which has opted-in to share data anonymously in Google Analytics. While they have not released the exact number of websites that are participating, they said that it hundreds of thousands. So, the data size is large enough to be relevant. 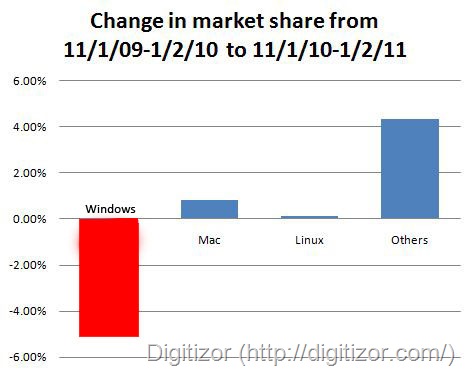 However, it can be debated if the actual number of Windows machine has decreased. Because of the rapid increase in popularity of iOS and Android, it it quite possible that there was no significant drop in the actual number of Windows machine – it could have even increased, in fact. If that were the case, it makes the increase in market share for Mac and Linux very impressive.

Google Analytics Team: Windows Market Share Down By 5% In One Year was originally published on Digitizor.com on July 3, 2011 - 12:06 am (Indian Standard Time)