Strangely enough, Windows 7 doesn't have this functionality. This was really a very important feature that saved us from a few more clicks and made controlling the Windows Media player very easy. Although there does exist ways of hacking into your system and make 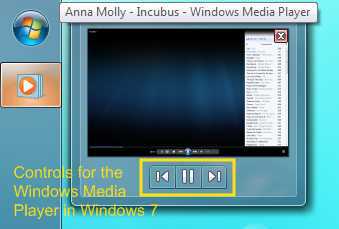 All you need to do is just hover over the Windows Media Player tab on the System Taskbar, the preview windows that shows up for Windows Media Player has options for controlling your Windows Media Player. Although, the controls provided are very basic - Previous Track, Play/Pause, Next Track. It does serve the purpose and is really good for a change! Please let us know how you feel about this new functionality by leaving a comment.