You Are Here: Home » News » Wordpress 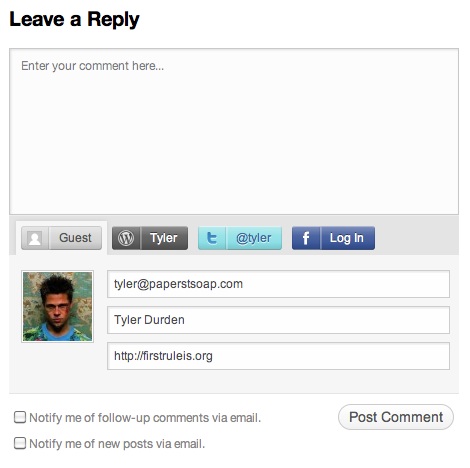 In an important move, WordPress has launched WordPress, Twitter and Facebook authorization and identity systems altogether for its own commenting platform. So, the new platform now allows you to post your comment while remaining logged in from any of these accounts. This new commenting system went live on every WordPress.com blog.

Earlier people did not care much to comment because they did not want to go through with the whole registration process. Now this system will open up the platform to more people by encouraging them to comment. Blog owners can delete/moderate/blacklist comments from Facebook or Twitter users the same way you can any other comment. Twitter or Facebook avatar will be used for these comments. The new comment system does not publish anything back to Facebook or Twitter, it’s only used for authentication purpose - to avoid having to fill in user's details manually. There’s no option to turn off the new feature, but who would need that.

The idea of inter networking to be authenticated is an important move. Facebook and Twitter are making their presence everywhere. This can be considered theirs win rather than a win for WordPress. WordPress has though tried to make things easy using these two platforms which millions of people are already using.

The commenting system lacks some other social services as Google's, LinkedIn,  HotMail and others. May be WordPress  will consider putting them in the future. That way people will get more flexibility rather than just using the Twitter and Facebook service. WordPress.com currently serves 18 million sites, including VIPs GigaOm, CNN and Time