Alienwares doesn't need intoductions. So lets get straight to the specifications of Alienware's current best offering.

except for the GPU solution, which in this case is procured from 'red' camp instead of 'green' one. Its graphics processing power is supplied by dual 512MB ATI Mobility Radeon™ HD 3870 running with CrossFireX™ . And this one also gives you a choice of faster proccessors like Intel® Core™2 Extreme Quad QX9300 2.53GHz (12MB Cache, 1066MHz FSB) / Intel® Core™2 Extreme X9100 3.06GHz (6MB Cache, 1066MHz FSB)to choose from. However maximum amount of RAM on offer is 4GB of Dual Channel DDR3 at 1066MHz instead of 8GB, but as you can see, it is faster (1066 Mhz compared to 667 Mhz). m17 also misses out Blu-Ray burner drive Intel Turbo cache memory and support for the swappable 'Smart Bay' HDD.

It also features an illuminated Keyboard which looks downright sexy when it glows( they call it : AlienFX® ). These stunning looking laptops does deserve a second glance. Well you have to shell out some $4700+ for m17 and $5100+ for Area-51® m17x with the above configurations, but for that price you get a great product and trustworthy after-sales service (you can't go wrong with DELL).

Qosmio is Toshiba's premium offering for avid-gamers who are not ready to settle for anything but the best. "An extraordinary family of laptops with a―well, far-from-ordinary name. Pronounced “KOZ-me-o,” these amazing machines are designed to be an exciting epicenter for all the entertainment you love, from non-stop gaming action to feature films, home movies, photos, and your favorite songs. Brace yourself. When it comes to fun our new Qosmio® notebooks are way off the Richter scale"--thats what TOSHIBA has to say regarding their flagship product. Its configuration is as follows.... 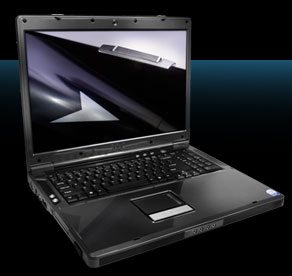 Velocity Micro is US giant specialized in building custom high-end computers and is a direct competitor of DELL and HP. The Raptor MD70 is their top of the line desktop replacement with the features of a desktop and the mobility of a notebook. The result - an ultra performance, impeccably crafted system customized to your unique specifications. Velocity Micro says : "Each NoteMagix™ Raptor MD70 undergoes our rigorous assembly procedures, ensuring the highest quality production in the industry". So one can expect nothing but the best. The Raptor MD70 hides the following main components under its hood....

Asking price starts at $2200 and goes up to $4800+ depending upon the width of smile you want to put across your face.