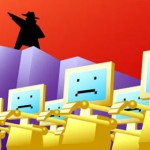 In December 2009, the Australian Telecommunication Minister, Stephen Conroy, proposed filtering of illegal and "unwanted" contents by the ISP.

In reply to the proposal, Anonymous issued a press release two days ago on Monday:

No government should have the right to refuse its citizens access to information solely because they perceive it to be unwanted. Indeed, the only possible interpretation of 'unwanted content' is content that the government itself does not want to be seen.

Australian Parliamentary Services Secretary Alan Thompson told The Australian that the parliament's website was hit by more than 7.5 million requests per second.