Last week, we published a story about Oracle removing blog posts by former Sun CEO Jonathan Schwartz. The reason why Oracle removed them is probably because of one blog post in which Schwartz congratulated Google on Android.

I just wanted to add my voice to the chorus of others from Sun in offering my heartfelt congratulations to Google on the announcement of their new Java/Linux phone platform, Android. Congratulations! 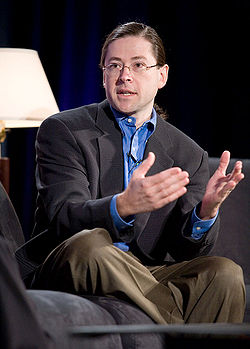 Naturally, everyone (including me) assumed that the blog post meant that Schwartz had no problem with what Google was doing with Java. This is the complete opposite to Oracle's stance on the issue. Hence, the removal of the blog posts by Oracle.

This blog post is very significant for two reasons - Google has presented it as one of their defenses and it made Oracle look like a greedy corporation who wants some of the money from Android at any cost. (Well, Oracle is hated before this and will continue to be hated even without this issue. That is another issue, however.)

However, things may not be what it seems. There is a possibility that Schwartz published his blog post prematurely without a full understanding of what Google was planning.

Andy Rubin, the Director of Mobile at Google, announced Android and the Open Handset Alliance on the morning of November 5th, 2007. Andy Rubin's post did not make any mention of Java. The first official mention of Java in relation to Android came in the press release that the Open Handset Alliance released on the same day. Google themselves did not mention anything about Java on that day.

It was later on that day that Schwartz wrote the said blog post in which he congratulated Google on announcing Android.

Although Java is open source, Sun charges a licensing fee for Java platform on mobile and embedded device (Java ME). Google never mentioned anything about Java but it is entirely possible that Schwartz mistakenly believed that Sun's Java will be a part of Android. The recent news that Sun offered to license Java technology to Google at $100 million further strengthens this.

So, yes Jonathan Schwartz, the SUN CEO at the time, did post a blog congratulating Google - but the events around that time suggest that he might not have been aware of the fact the Google is trying to pull a fast one with Dalvik. Does this affect the case between Oracle and Google? I do not know. But it certainly sets the whole issue in a different light.