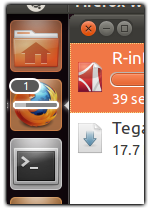 The extension is currently in development and has not been reviewed by Mozilla yet. But if you want to use it, go to the link given below on Firefox and install it.

It will warn you that it has not been review by Mozilla when you try to install it.

If you are use Unity and Firefox, this extension is definitely a must have. It eliminates the need to check for the download progress on the Firefox download window.

Users of Unity 2D will also be glad to know that this extension works with Unity 2D as well. (Unity 2D is a lighter version of Unity. If you want to install it, refer to this guide.)