Facebook is reportedly in the process of testing a games-only activity feed which if introduced, would replace the current games ticker on the social networking website. The company has been planning to remove the games ticker for a while now. Instead, the activity feed would be introduced, which is actually a sub-option under the App and Games menu. It gives a condensed version of all your friends’ games stories in one single page like the regular news feed, with recent stories coming first. 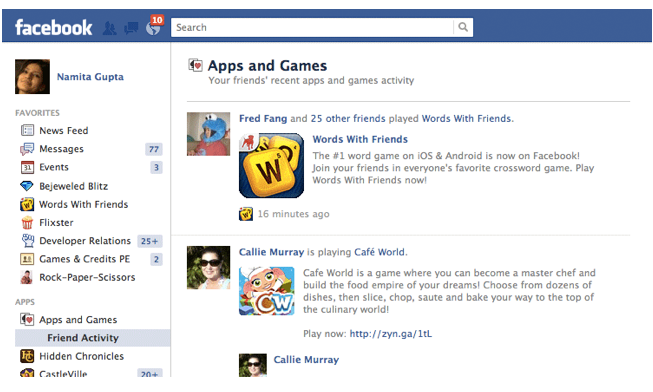 Facebook plans to launch a Games only activity feed

The Facebook developer blog reports that the company is still debating over whether the games ticker should be done away with or not. It hasn’t been much of a traffic generator, and Facebook is instead looking for alternative ways to improve the games experience on the website.

Meanwhile, Games bookmarks will be kept since according to Facebook they being in a lot of traffic and promote re-engagement. Both the ticker and the bookmarks were launched together in the summer, and have been updated several times since.

The Games activity will be further incorporated in with the new Timeline and News Feed changes which have been introduced in the last one month. The News Feed for games shows recent friend activity as well as sorts out games by genre, however, the Timeline only shows games achievements currently.

The new feature to be introduced would not only have achievements, but would also list high scores in various games, and a bookmarks section for the most played games which will be listed as Top Games. Other changes which the company might look into would be friend comments and likes on individual game stories.

Besides these changes, the app profile pages will also be removed from Feb 1, effectively meaning that Likes and URLs will have to be shifted to an existing Facebook page before the profile pages are removed.