You Are Here: Home » Blogging » News

A new study on the online presence and activity of the Inc. 500 companies, being conducted at the University of Massachusetts at Dartmouth under Nora Barnes has revealed that the number of companies which run corporate blogs has declined over the past one year. UMass researchers have been observing this set of companies for a long time, and just about 37% of these maintained a corporate blog last year, the number falling to half of what it was in 2010. 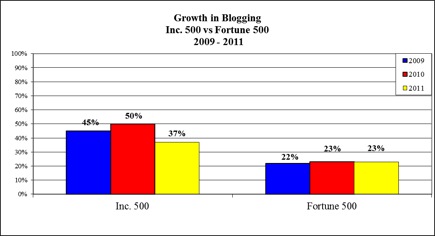 Since its surge as a popular social media tool among US business companies in 2007, corporate blogging has for the first time seen a decline in the past 4 years among the Inc. 500 companies. The results of the study are quite contrasting to the online activities of the Fortune 500, where the adoption of blogging has been more or less consistent, while it has witnessed a setback for the Inc 500.

By conducted a survey among 170 companies, Barnes found out which social media platforms they now use. While Facebook topped the list, Twitter came second, but both saw an increase in usage from 2010 to 2011. However, blogging saw a 13% fall in usage in the same period.

For maximum companies, LinkedIn and Facebook are essential for their working, while 90% executives recognize the role of social media in promoting brand awareness and marketing. Similarly, about 80% find social media important for driving web traffic towards their websites, and generate a buzz around their products.