Mozilla Firefox 10 Is Here With All New Features

The Mozilla Firefox version 10 is soon going to be out in beta, with new features which build on the latest Web standards such as CSS3, HTML5 and others. The new changes being brought out by Mozilla are all geared towards competing with Google Chrome, and work to enhance the user experience from beneath than from the surface of the browser. 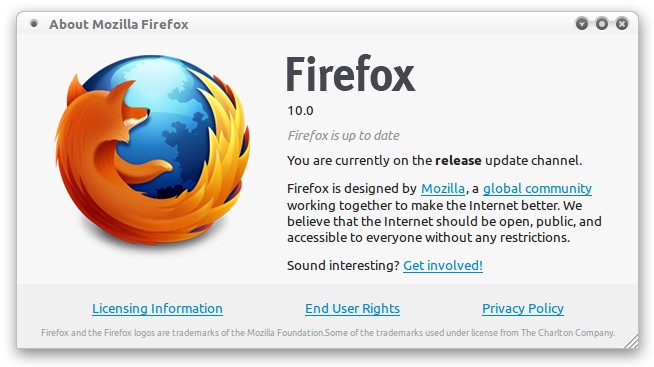 Full screen API support for Web apps, better plugin management and CSS 3D transform support are just some of the major enhancements in the version. Apart from these, other new features include anti-aliasing for WebGL, a forward button that is hidden unless you navigate to it, new CSS style inspector and many more developer oriented changes.

Firefox has faced some very tough competition from Chrome, the latter dethroning the former from the second place as the most used browser. Apart from fastening its release cycle, Mozilla has taken Pete Scanlon on board who was formerly the marketing manager for Google.

However, of the many known issues with Firefox, majority of them still remain unresolved apart from the fact that Firefox notifications can now work with Growl 1.3 or later.

The new version release also has the new Firefox Extended Support Release version, which addresses concerns among the IT community regarding the browser’s rapid release cycle, something that IT managers find quite challenging.

Even though Firefox does not have much of a presence on mobile right now, the new version also has certain mobile enhancements, especially the Firefox Sync which allows a user to sync browser data such as bookmarks across different devices. It’s market share in mobile is not anything significant yet, even though it has a browser for Android. It hasn’t made any mark in iOS yet.

Firefox has been coming out with new versions and updates quite frequently, but still has a long way to go when it comes to incorporating certain features which are already there in Chrome and even Safari and Opera.

Mozilla Firefox 10 Is Here With All New Features was originally published on Digitizor.com on February 1, 2012 - 11:29 am (Indian Standard Time)