Firefox 5 Available Ahead Of Schedule 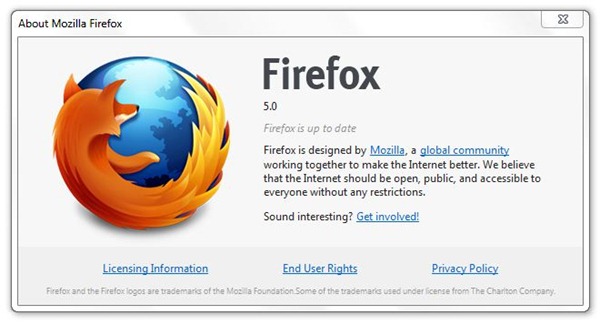 Firefox 5 is supposed to be officially available on 21st June, but it seems like it has been rolled out to those who have been using it from the beta channel.

Because of the new development schedule, Firefox 5 comes just 12 weeks after the release of Firefox 4. The new release schedule also means that, unlike the earlier major releases of Firefox, Firefox 5 is not drastically different from Firefox 4.

Firefox 5 has the same user interface as that of Firefox 4. However, there are some improvements under the hood such as better support for CSS animation, improved performance of Canvas animation and JavaScript engine etc. Another important change is the more easily accessible Do-Not-Track-Me, which is now located at the top of the Privacy Settings. Refer to our earlier article on Firefox 5 Beta for the new features that have been included.

To get Firefox 5 now, you can download and install the beta from here. After installing the beta, update it from Help > About Firefox.

(Note: You might want to read this article, if you want to install using the PPA in Ubuntu.)

Here are some benchmark scores for Firefox 5:

We will publish a more detailed benchmark with comparisons between different browsers and operating systems later.

Firefox 5 Available Ahead Of Schedule was originally published on Digitizor.com on June 19, 2011 - 7:38 am (Indian Standard Time)