Mozilla To Pin Firefox To The Windows 7 Taskbar By Default?

If you are a Windows 7 user then you must have seen that Windows Media Player and Internet Explorer are pinned to the Taskbar by default. Well it seems that Mozilla now plans to pin Firefox and it's other products to that Taskbar too. Although there is no documented way to pin shortcuts programmatically to the Windows 7 taskbar and this is kind of self explanatory as Microsoft would obviously reserve that space for it's own products. 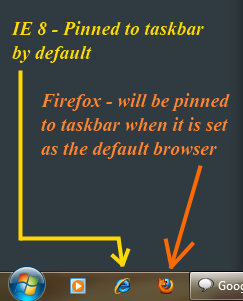 So what is Mozilla exactly planning to do? In simplest of terminology Mozilla wants to put it's various products likeFirefox and Thunderbird on the Windows 7  Taskbar when these products (Firefox & Thunderbird) are chosen to be the  default programs for their respective tasks by the users. Ideally, Windows 7 should automatically pin those applications to the Taskbar which are most frequently used by users.

This is confirmed by an entry in the Mozilla Bugzilla - Bug 621873 - "Pin to taskbar when setting as default browser on Windows 7". This is what the Bug report says:

By default there is no quick launch bar in windows 7. And few users care to get it back. So i suggest this option be unselected when installing on Windows 7.

Mozilla To Pin Firefox To The Windows 7 Taskbar By Default? was originally published on Digitizor.com on February 15, 2011 - 1:03 am (Indian Standard Time)