The news of the death of Stephen Gately, the star from the Irish pop band - Boyzone, is being used to spread virus (otherwise known as scareware). Using black hat SEO techniques, criminals have been successful in putting up fake websites which supposedly has informatio regarding the incident. This follows a recent trend of the Google page ranking system being abused to improve the rank of poisoned websites.

When a user click on the link of one of these websites, it tries to fool the user into believing that the computer is infected with virus. It then tries to make the user install a fake anti-virus, which the actual malware, to remove the "infections".Here is a screenshot of the the page: 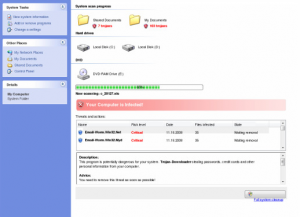 Any tech-savy user will immediately see through this, after all you don't have My Computer opening inside a browser. (When it opened in my Ubuntu system, it was quite hilarious seeing My Computer.) However, for the majority of the people using the internet, it will just scare them into installing the malware.

If you are ever confronted with this page, just close it and do not download or install anything. If at all you have downloaded and installed it, update your anti-virus and run a full system scan.