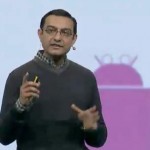 Google has made some very interesting and remarkable announcements in this year's Google I/O. Here is a brief description of the announcements they made.

Froyo - The next version of Android

Google announced the next version of Android called Froyo; and it has tons of cool new features. Froyo has a super fast browser which supports HTML5. Froyo will also support tethering. Another big announcement with Froyo is that it will support Flash.

Google has announced plans to start selling music through the Android market. They have also announced the purchase of Simplify Media, using whose technology you can stream music from desktop to mobile phones.

Google has finally announced Google TV officially. It will be in set top boxes and televisions and will run on Android. It aims to bring to converge the web and TV experience. Google TV will run Android apps and will also have a browser. They also announced YouTube lean back, a channel for Google TV which tries to emulate a normal television.

Google made public some data regarding Android. The most striking of them was that there are now 100,000 new Android device activations every day. Google also said that its navigation service has covered 1 billion miles.