Google is up with lots of surprises for all the users of its various services. Google Plus has already been one of the surprises which Google gave its users in terms of a sudden launch. Now, Google plans to discontinue its Photo sharing platform Picasa and the blogging platform Blogger and will re-introduce them as Google Photos and Google Blogs. 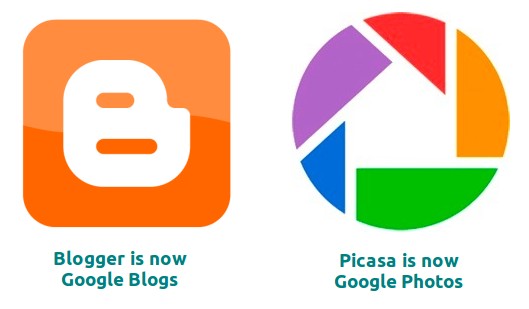 Users of Blogger and Picasa should not be worried as these will not lose any current functionality and it is just that only their names will be changed and will have a new identity from now on. It is being said that this re-branding will occur during a period of  a month and a half from now so that these are ready by the time Google publicly launches Google+.

Google+ being a social tool makes a perfect platform for Blogger (Google Blogs) and Picasa (Google Photos) to be used as a whole letting users to blog, upload photos and share them easily with their friends with the help of Google+. Google Blogs brings a Facebook Notes kind of feature to Google+ and similarly Google Photos is aimed at adding a Facebook Photos like feature to Google+

Picasa became a part of the Google family when it was acquired way back in 2004 and Blogger came to Google after it was acquired in 2003.We have learned that Google plans to do this re-branding for all non-Google brand names (the ones which have been acquired by Google) and re-brand them with a Google tag. The only service which won't be re-branded is YouTube as Google's failed video service Google Videos has been already shut down.

Google has more plans for newer and better features on Google+. We will keep you updated as these features get revealed gradually.