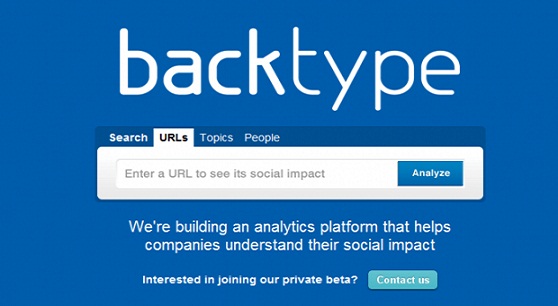 So, Twitter continues with its acquisition streak. Twitter has just acquired social analytics startup BackType in a deal undisclosed. BackType will be joining Twitter’s platform team in San Francisco, where they will be focusing on creation of tools for Twitter’s publisher partners. This acquisition rather seems like just another talent acquisition.

BackType is a San Francisco-based startup that helps publishers understand measure the impact of social media use (including Twitter and others) and then use it to make decisions later on. For example, a major product BackTweets helps a publisher to see to the extent to which their tweets are reaching and how far and well is the impact created. This can then further help to realize the sales and level of performance.

Other products include BackType Connect which are used by companies as Disqus (for Disqus comments ) and Kosmix to retrieve relevant comments and information. Several other APIs too exist.

We also created BackTweets to help publishers understand the reach of their tweets and content, who they are reaching, and how Tweets covert to web traffic, sales and other KPIs. Joining Twitter gives us the opportunity to bring insight to tens of millions of publishers around the world that are using Twitter to communicate and connect with their audience.

The assistance of BackType goes for some more than hundred companies. Now onwards they will not be entertaining any further new registrations for BackTweets. The company says that its BackTweets product will be offered to current users for free.