Last month, Google released an open-source project called WebRTC which aims to enables Real-Time Communications capabilities in the web browsers through simple JavaScript APIs. Now, they have taken the first step towards having WebRTC built into Chrome.

Right now, real-time communication (video or audio) through the web requires proprietary technology either through a client or plugin. Even the video and audio chat in GMail requires a proprietary plugin to be installed to the web browser.

WebRTC is a result of Google’s acquisition of GIPS. After the acquisition, Google released the voice and video engine technology as WebRTC under a royalty free BSD license.

When we are done, any web developer shall be able to create RTC applications, like the Google Talk client in Gmail, without using any plugins but only WebRTC components that runs in the sandbox.

With WebRTC, developers will be able to build voice and video applications using nothing more than HTML and JavaScript. This is a powerful technology which can challenge services like Skype. 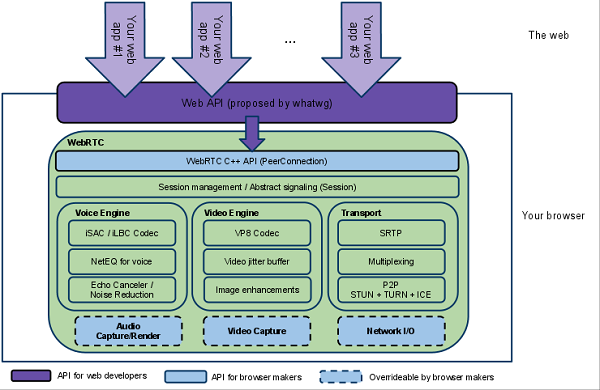 Before it lands in Chome, WebRTC will be built into Chromium – the open source version of Chrome. The part of WebRTC that is about to land in Chromium is not yet complete however. Right now, only the media processing capabilities will land in Chromium. The remaining such as the JavaScript API for handling the audio and video capture and rendering will land soon.

Google has a lot at stake with WebRTC. They are the main force behind web-based technology and with WebRTC, they are hoping to make yet another desktop application available through the web itself. To achieve this, they are betting on the other web browsers too adopting WebRTC. Google has already secured the support of Mozilla and Opera for this technology. So, expect WebRTC to be available in Opera and Firefox as well.