The much awaited Google+ app for the iPhone is now live in the App Store, and you can download the free app here. In less than 24 hours of being live, the Google+ iPhone app has reached number one position in the free app category in the Apple app store.

The iPhone app has been with with Apple for sometime for reviewing purpose. The new app contains similar features as the website, including Circles, stream of updates from contacts, and Huddle, group messaging in your circles.  Google+ app is compatible with Apple iPhone running iOS 4 and higher versions. The app will see some major updates after Apple launches iOS5.

Features in both iPhone and Android app are nearly same. The Android version which was launched in the initial days of Google+ has a better photo upload feature. This helps in instantly uploading videos and photos from the device to the Google+ album in the cloud. Anyways, the app has brought a great sigh of relief for the iPhone users.

Initially, the app contained some bugs because of which many users got it crashing after initial usage. The bugs have been fixed now. Some minor updates will also be released soon. Since Google+ has seen a large growth rate right from its launch, the app was bound to be an instant hit. The app has surged to top position in the free app category beating out “Draw ‘n’ Go: Awesomeness!”. 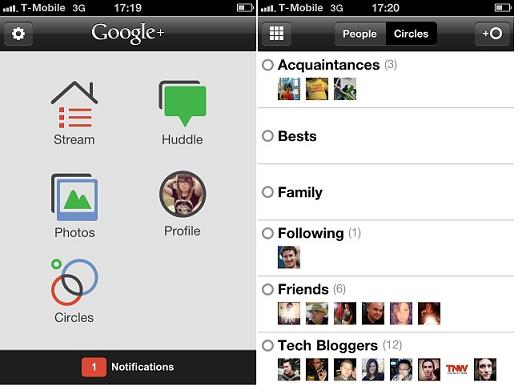