Cheating is something which one would least expect of an organisation as big as Microsoft. Well, not exactly. In the past we have reported how Internet Explorer 9 was caught cheating the Sunspider Benchmark tests. Now, we are getting reports from various sources online that Google has caught Bing copying search results from Google after this was proved in a sting operating which Google has been conducting on Bing for over a month.

During the month of October in 2010, Google started noticing uncanny resemblance between it's results and those of Bing for certain keywords. Not only this, on various occasions, even the placement of the links (as in the order) in the search results were also the same.  In order to ascertain all this, Google started injecting synthetic results for queries that returned zero results on both Bing and Google. 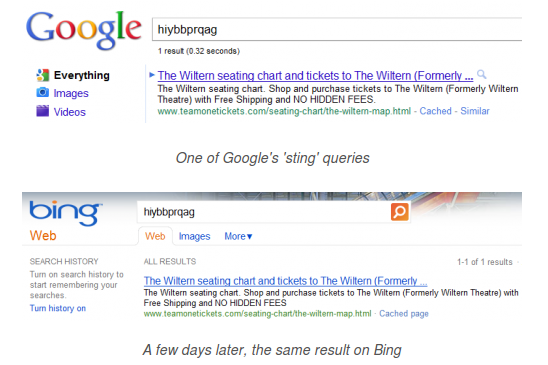 using Internet Explorer having Suggested Sites and Bing Toolbar turned ON. Almost two weeks later, those results started appearing on Bing too!. Here is an illustration of the Sting Operation as explained by SearchEngineLand.

It is not that Google has not faced competition from Bing as Google had launched a section called Explore Google Search enlightening it's users with the fact that that Google already has most of the features which Bing was selectively advertising (or rather boasting) of. On another occasion, Google started rolling out a sidebar on the search results page, something which Bing already had.

Healthy competition is good. It helps improve products. But unfair means to move ahead in a competition will never be tolerated by anyone. With all this "cheat" stories floating around, we would like to pose a question to Mr. Gates: Has MS Lost It with Internet Products?