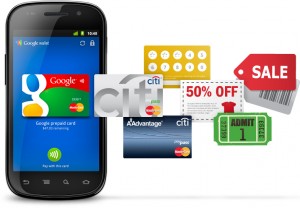 Google announced the launch of a new mobile payment system called "Google Wallet" on Thursday. The service lets you store your credit cards inside your smartphone, then use the device to make contact-free payments. All you do is wave your phone in front of a special sensor, and the payment is made. The payment system got a backing from a number of retail and financial partners including Subway, Macy's, Walgreens, Toys 'R Us, First Data, Citibank and MasterCard and   Sprint being on the carrier side.

Lets take a look on the what it has to provide along with some issues of Google Wallet.

Get lucky with MasterCard !

MasterCard's partnership means Google Wallet will be fully compatible with the PayPass contactless payment system that's already widely in place today. Currently, MasterCard PayPass is available at hundreds of thousands of merchants across the United States. You can find a list of places in your area that'll work with Google Wallet. Google says it's working quickly to add more credit card options into the service.

How to make a payment through Google Wallet?

When you're in a store that supports MasterCard PayPass, you'll type in a PIN and wave your phone in front of the PayPass terminal when you need to make a payment. Customers will receive a receipt then. Google says no network connection is needed to make a Google Wallet payment- so there is no problem if one is having bad reception.

Using Google Wallet is going to be very secure. It stores account info encrypted on a special chip called the 'Secure Element' inside the phone which is completely separate from the rest of the phone's hardware and isn't connected to the operating system, either. Only authorized programs like the Google Wallet app can access the chip- and if someone tries to hack into it, it'll automatically self-destruct. Both the Android platform and the Secure Element are designed to prevent any malicious program access the informations.

Google Wallet does not currently receive data about what products you purchase with it. Google Wallet does record (locally on the phone) the time of an initiated transaction and which credential was used. This is an optional feature which can be turned off too.

How Google Wallet is meant for other, non-Android phone? Google VP of Commerce Stephanie Tilenius said," In terms of iPhone, RIM, Microsoft — we will partner with everyone". It has been widely rumored for months that Apple was working on their own NFC solution for a future version of the iPhone. NFC is surely a huge opportunity on which many companies will try their hands on. So, it doesn’t make a lot of sense to partner with a rival on it. Google has yet to mention anything about support for phones outside of its Android operating system, but a solution is there for sure.

If Google truly are making an open wallet, it needs to be cross-platform.

Don't you worry if your phone lacks the capability of NFC. There is surely a way around. Users will be able to obtain special NFC stickers with a single credit card associated with them (such stickers are already there, but these stickers will apparently be able to communicate with the Google Wallet app). This sticker, when tapped on an NFC device, then works with Google’s cloud and the app on your phone to handle payments.

Google Offers, a kind of electronic coupon system which will deliver an "offer of the day" to your inbox, and let you seek out other offers from retailers. It also ties into Google Wallet, and you'll be able to both redeem offers and receive loyalty rewards from retailers with just a tap of your NFC-enabled phone. You can learn more about "Offers of the Day" at www.google.com/offers.

Other than the basic features, Google envisions the Wallet program one day handling things like driver's licenses, hotel keys, and even concert tickets, too. It eventually sees everything from boarding passes to tickets to IDs (and even keys) being stored on your phone. All of this is for now is the US, but Google is working on international expansion too. Many more features will be incorporated when the thing is in wider use.