Mark Shuttleworth: Our Goal Is 200 Million Ubuntu Users In 4 Years 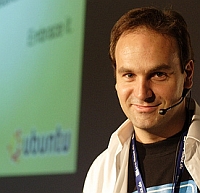 Delivering the keynote at the Ubuntu Developer Summit at Budapest, Hungary, Canonical Founder, Mark Shuttleworth, has announced that the goal of Canonical is 200 million Ubuntu users in four years.

Canonical has not officially not provide any data on how many Ubuntu users are there currently - in fact it, is quite difficult to track it. However, according to Prakash Advani, Partner Manager - Central Asia at Canonical, there are an estimated 12 million Ubuntu users.

Our goal is 200 million users of Ubuntu in 4 years.

Going from 12 million to 200 million in a span of four years means that Ubuntu cannot be content with just being the most popular Linux distribution. Canonical have to get Ubuntu out there and noticed by the majority of the people who uses Mac and Windows and make them switch side.

The idea of freedom and open-source is clearly not enough to make users switch over to Linux from Windows and Mac. Polished and useful software that takes care of user experience is what will draw users. That will mean development with users in mind - something that Canonical has been doing with Ubuntu. This is what Shuttleworth said;

In fact, unlike other Linux distributions, Canonical did a lot of design testing and user experience testing during the development of Ubuntu 11.04. If Ubuntu is to achieve the goal of 200 million users, such testing will become more and more important.

I think we’ve set a new bar for disciplined design in free software. For actually going through a vigorous design process, testing work against users actual experience of that, testing our assumptions, iterating based on that testing, and ultimately shooting for the stars.

I think that 200 million Ubuntu users in four years is certainly achievable - although it will require a lot of hard work. However, another fiasco like the one with Ubuntu 11.04 will make 200 million users a distant dream. Canonical have to make sure that they do not repeat what happened with the transition to Unity when they finally make the switch to Wayland.

Do you think that 200 million Ubuntu users in four years in achievable?

Mark Shuttleworth: Our Goal Is 200 Million Ubuntu Users In 4 Years was originally published on Digitizor.com on May 9, 2011 - 6:29 pm (Indian Standard Time)