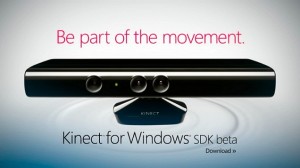 Kinect hardware, launched last year, is a sensing camera and microphone device that plugs into the Xbox 360 console. The console comes with standard USB support and is quite inexpensive which made it a success. Last week, Microsoft made it an entertainment spot with addition of YouTube, voice commands, television shows and more features to Xbox 360. The company first announced plans for a Kinect SDK in February.

The SDK is designed to empower developers, academic researchers and enthusiasts to create new experiences that include depth sensing, human motion tracking, and voice and object recognition using Kinect technology on Windows 7. It contains nearly all libraries which are available to the Xbox 360 developers. It gives full access to everything offered by peripheral, including both cameras (VGA and depth-sensing) and the full microphone array. The SDK provides following features -

It comes in a size of less than 100 Mb, quickly installs easily and requires no complex configuration. The SDK includes more than 100 pages of high-quality technical documentation aimed to provide a detailed walk-through. It is designed for non-commercial uses and a commercial version will hit the market later on.

The Kinect SDK potentially provides an environment to bridge the physical world with the computing world. With Kinect for Windows SDK Microsoft aims to enable new experiences for natural user interface technology beyond gaming and entertainment. After the developers get their hand on the beta product, many more functionality will be introduced in near future releases to widen the horizon.

Download and get information on Kinect SDK from here.