A report released by Mobile app analytics firm Flurry, says that mobile device users are now spending more time using apps than surfing Internet on their PCs. The report reflects how popular mobile apps are getting among the users.

For analysis purpose the firm used publicly available data from comScore and Alexa. For mobile application usage, Flurry used its own data which now exceeds 500 million aggregated, anonymous use sessions per day across more than 85,000 app. The apps that Flurry tracks consists of apps on platforms like iOS, Android, BlackBerry, Windows Phone and J2ME. However the results do not include the mobile web consumption.

The report comparing the engagement of smartphone users on mobile apps vs. web browsing on the PC says that an average user now spends 9 percent more time on the device apps than what he does on Internet browsing on PCs. Users are spending about 81 minutes each day on apps of one form or another, while they’re only surfing the web for about 74 minutes each day. This sees quite a change in the data of the last year which had 43 minutes usage of mobile applications versus an average 64 minutes usage of the Internet. 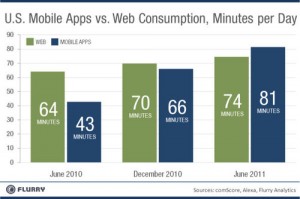 The report also dug deeper into the categories of the mobile apps being used. The top category being the game apps which see 47 percent usage followed by social networking apps with 32 percent. News apps are used 9 percent of the time, followed by entertainment apps at 7 percent and “other” with 4 percent. 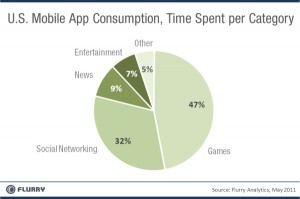 The other revealing of the report are  :