Today, Canonical has made a huge announcement - they are launching Ubuntu for Android. It is not the rumored Ubuntu for mobile but, in my opinion, even better. Ubuntu for Android is basically a full desktop Ubuntu running on an Android phones when docked. It is sort of similar to what Motorola's Atrix does.

Ubuntu for Android is different from many ports of Ubuntu for smartphones that we have seen. In Ubuntu for Android, the phone itself will run Android. However, when it is docked, the phone run an Ubuntu session on the desktop. Users will have access to Ubuntu applications as well as the apps installed on his phone. The Ubuntu session has deep integration with Android. They will share the contact list, text messages, emails, calender etc. Users can also make and receive calls from the desktop. 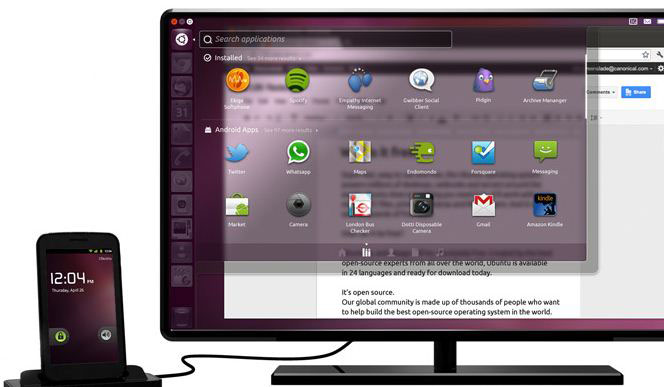 In Ubuntu for Android, some of the default applications that are installed are Chromium, Thunderbird, Google Docs, Google Calender, VLC, Gwibber, Ubuntu Music Player etc. Canonical has also mentioned that certified apps from Citrix, Adobe, VMWare etc. are also available for business users.

The minimum hardware requirement for the phone to run Ubuntu for Android is as below:

Ubuntu for Android is, however, not targeted directly towards the user - it is not an app that users can installed - and it is not free. Canonical is targeting the OEMs with Ubuntu for Android and they are planning to charge a per unit service fee for it.

With all the horsepower that the modern Android phones have, this really is a very interesting development. Canonical has not confirmed if Ubuntu for Android is coming to any upcoming Android phone.

You can get more information at http://www.ubuntu.com/devices/android

Canonical Announces Ubuntu For Android was originally published on Digitizor.com on February 22, 2012 - 12:19 am (Indian Standard Time)