In a report that was published recently by Forrester Research, the percentage share of various Operating Systems corporate organisations were revealed. One quick look at the accompanying Graphs with the report reflects the extent of penetration of the Windows operating system in the market. Windows 7 is installed in nearly 21% of corporate PCs while Apple's Mac OS accounts for only 11%. 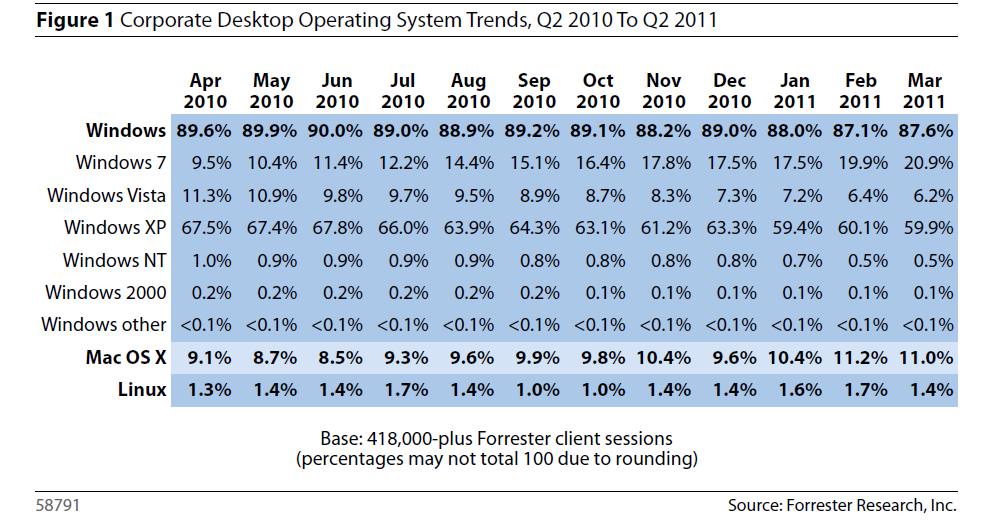 The total share of Windows constitutes 87.6 % which is much higher than Mac and Linux OS. The reason for these are mainly:

One can observe the decrease of windows XP from 67% to 59% reflecting the corporates are upgrading their hardware and software continuously. Also, for latest PCs, Windows 7 OS has a even higher percentage share of about 31%. Windows Vista percentage is decreasing gradually due to the obvious fact that it was not well-received by users and is being upgraded to Windows 7 in many organisations.

The share of Apple Mac OS increased by about 2 % over a year whereas Linux got a nearly constant percentage of 1-1.8%, which is used mainly by Linux fans and Network administrators.