TeamViewer Is Probably The Best Remote Desktop Application For Android

The TeamViewer Android app has been available for sometime but it has been included in the Android Market only recently. The TeamViewer app for Android is the real deal – you can pretty much do anything you want on the client computer using the app. Unlike apps such as Gmote, TeamViewer works over the internet. That means that as long as both your PC and your Android device has an active internet connection, you can use it regardless of the distance. 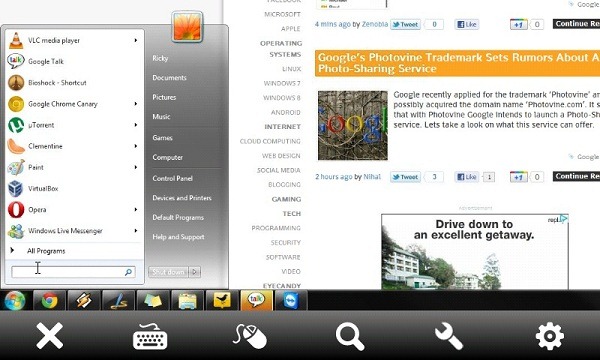 The app supports gestures for special tasks like right-click, drag and drop etc. It also supports pinch zoom so that you can zoom into certain parts of the desktop. Keyboard controls like the CTRL, ALT and Super keys are also provided by the app.

I have been testing this app over 3G for a while and i have to say that it works perfectly. There is no feature that I find lacking. There are occasional lags but that is probably due to the network.

For such a well polished app, TeamViewer is surprisingly free for non-commercial use. The free version does not have any ads either.

The TeamViewer Desktop Client is available for Windows, Linux and Mac. After installing it, users will be provided a user ID and a password. You can use your user ID and password to connect to your computer. The links for the desktop client and the Android app are given below.

TeamViewer Free for Android on AppBrain

TeamViewer Is Probably The Best Remote Desktop Application For Android was originally published on Digitizor.com on June 20, 2011 - 12:20 am (Indian Standard Time)