Is Windows XP SP3 The Biggest Rival Of Windows 7? 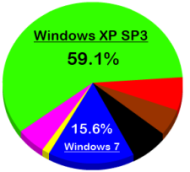 With Microsoft planning to fully withdraw official support for Windows XP, it will be not a very good option for enterprises to continue running their infrastructure on Windows XP. Microsoft's revenue reports indicate that the adoption to Windows 7 is catching up fast among both professionals and home users. However, many enterprise Windows users still plan to upgrade to Windows XP SP3 instead and not Windows 7.

In this poll by PC Advisor, Windows XP users were asked about their immediate plans given that Microsoft has withdrawn support for XP SP2. And here are the results: 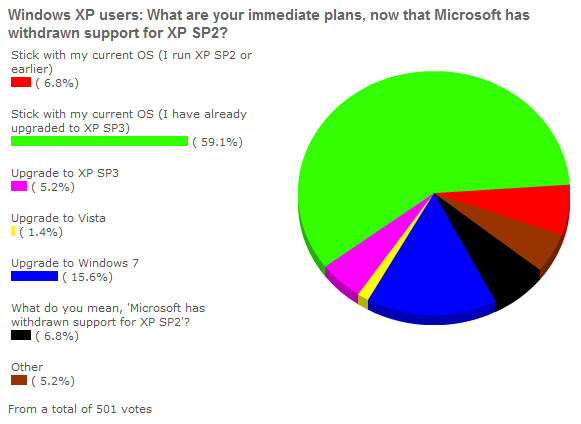 So what do you think is actually keeping users and probably enterprises to stay away from taking to Windows 7?  We feel it is the huge costs involved with the migration to an entirely new operating system, Windows 7 in this case. A majority of businesses still use Windows XP, and for a lot of them, the cost of upgrading all of their machines to Windows 7 is not financially tenable.

Also, for users it is definitely an easier and cheaper option to download and install the SP 3 update to Windows XP rather than moving their infrastructure to an entirely new operating system, Windows 7!  Plus, given the low system requirements of Windows XP, users do have a point that Windows 7 won't be supported on systems that are low on hardware. So Windows XP SP 3 becomes a better choice for such users. With many IT companies and their employees still feeling the heat of the economic slowdown, IT spending is a big bet.

We see it as a war between Microsoft's decade old and aging Windows XP and the new generation Windows 7. And this has definitely been troubling Microsoft for quite some time!

Is Windows XP SP3 The Biggest Rival Of Windows 7? was originally published on Digitizor.com on August 26, 2010 - 7:59 pm (Indian Standard Time)