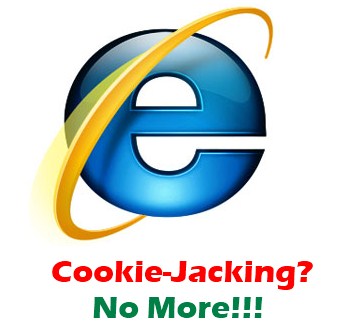 A couple of days back we told you about the Cookiejacking Vulnerability in Microsoft Internet Explorer using which hackers can remotely hijack your browser cookies and steal digital credentials of your various user accounts on sites like Facebook and Twitter.

However, according to Microsoft there has been no report of users getting affected by or being victims of this vulnerability, in a massive way and it has already started working on a fix for Internet Explorer which aims to plug this Cookiejacking Vulnerability hole in the browser.

We expect this security update to be integrated into the next batch of updates for Internet Explorer and since the company is not giving any specific importance to this vulnerability due to it's nature, we don't expect the security update to come out as a patch.

Brandon LeBlanc from Microsoft, while speaking on this, highlighted two important features of Internet Explorer which have been specifically designed in order to protect users from such scams online.

Second Internet Explorer's InPrivate Browsing feature protects you from various forms of cookie-jacking attacks by preventing the storage of cookies from earlier browsing sessions on your computer.

[Update] Microsoft To Release Patch For IE Cookiejacking Vulnerability was originally published on Digitizor.com on June 2, 2011 - 10:08 am (Indian Standard Time)