Google is facing a hiccup with it's Android Mobile operating system in Taiwan. The search engine giant, which takes all the important decisions about Android's life cycle, removed the paid - apps section from the Android Market for Android users in Taiwan.

This leaves both users and developers in a sorry state as users may face problems using these paid apps from the Android Market and Android developers from Taiwan will have one of their revenue channels cut off as they won't be able to earn any money from the paid apps. 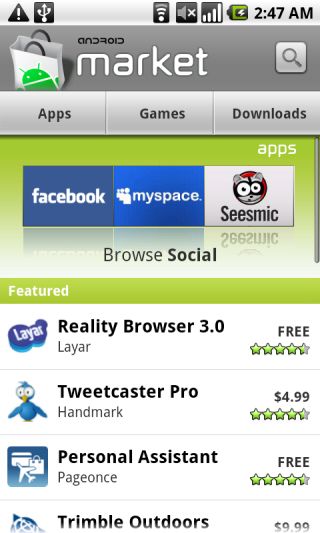 The Taiwan Govt. law requires companies to offer their consumers a seven day free trial of their products before consumers actually pay to get the product. However, the Android Market has a refund window of only 15 minutes for all paid apps.

This means the users in Taiwan get only 15 minutes to try the apps from the Android Market before they can ask for a refund and this is not in accordance with the Taiwanese law which requires a refund window of 7 days.

This led the Govt. agencies in Taiwan  to slap a fine of Taiwan Dollar One Million (US$ 34,550) on Google and in reply Google took down the Paid Apps section of Android Market for Taiwanese users. Google Taiwan has confirmed the fact and this is what they have to say:

Earlier, Google used to have a refund window duration of 24 hours but this duration was reduced to 15 minutes just last December.

Earlier, even Apple did not have any such 7 day trial - refund provisions for it's paid apps in the App Store. But when the city government of Taiwan, on the 4th of June this year, gave Apple and Google a 15-day grace period to include service provisions for a seven-day free-trial mechanism, Apple agreed and brought in the required changes whereas Google failed to comply.

Smartphone giant HTC however feels that this step from Google is temporary and the paid apps section would be back as soon as Google reaches an agreement with the Taiwan Govt.

Till then, HTC does not expect much effect of this entire episode on the sales of its handsets as users con very well download the free, less-capable versions of these apps before buying the full version.