Google has released what many might consider a missing app for Android - Google Docs. Although Google has recently worked on improving Docs to make them work better on mobile devices, something was still missing because Docs was not available as a native app for Android.

The Google Docs App for Android allows you to do most of the things that you can do from the web based Docs and a few more. It allows you to create and edit documents, spreadsheets etc. A letdown that that I should not forget to mention at this point is that when editing, the app opens the mobile Docs website inside the app. This means that you will not be able to edit documents when you are offline. This is something which I expect Google to fix in the next few releases.

The coolest feature of the Google Docs App has to be the character recognition. With this feature, you can just take a picture of texts - maybe from a book, newspaper etc. and the App will convert the character in the image into text format.

The Google Docs App for Android is available in the Android Market for free. Click on the link below or scan the QR code with your Android phone to install it.

Here are some screenshots of the app: 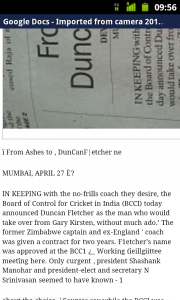 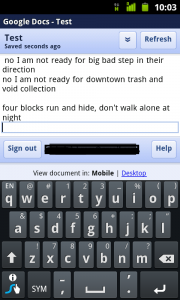 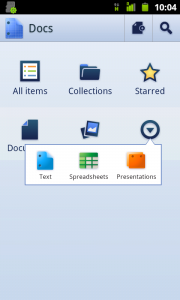