Google Reminding Users To Call Their Dads On Father’s Day

Today is Father’s Day and Google is playing its part by reminding GMail users in the US and Canada to call their Dads. Of course, Google is sort of promoting its own product but hey no one is complaining.

Google Voice allows users to call any US or Canada number for free. Currently Google Voice is limited to users from the US only. So, people from the other parts of the world have to call using the old fashioned way. 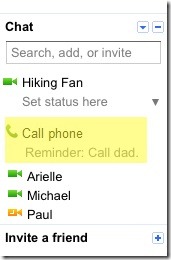 This is what Michael Bolognino, Product Marketing Manager at Google, wrote:

If you’re in the U.S., you can use Gmail to make free domestic calls and calls to Canada. If your dad lives abroad, we have some of the best rates around, like two cents per minute to Australia, Argentina, France and many other parts of the world (unfortunately, those of you outside the U.S. will have to phone Dad the old-fashioned way).

Google has provided a reminder for GMail users under chat.

(via: The Official Google Blog)